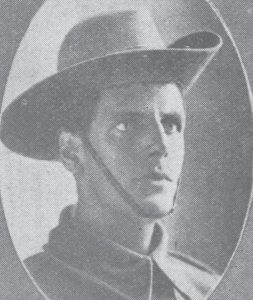 Read about Bousfield as Darwin Missioner

The following letter from Mr. Robert Bruce Bousfield, who is now with the expeditionary forces, will prove of interest to our readers: —
My Dear Mr. Kirkland,—Just a line to say all’s well. Sorry not to have seen you last July on leaving, though I expect you had a good grin when you got back from your holiday over some of my small activities! Now do give my warmest remembrances to our mutual friend when you write to him, Mr. Thompson. I suppose he has gone south by now. Anyhow, remember me sincerely to all old friends in the Territory, and tell them to take it personally, each of them. That is the one disadvantage of having so many of them. One cannot compile a list, lest it be in- complete.

Here I am out of the firing line again, getting quits of a couple of hits in the leg, scored from the Turks. But I hope to be back in the Dardanelles or wherever the boys are, in good time, and to fire a few more shots for Australia. There is another Territory man whom I met after the engagement on the hospital ship. He came along and recognised me—a chap named Mansfield from the copper smelter above Brock’s Creek.  He asked to be remembered to friends in the North. It was a great joy to me to meet him, and we had  a long yarn about Territory people and affairs. It may interest his friends to know that he is in the N.S. Wales 1st. Brigade.

….. We answered them by attack for attack, and in place of being driven into the sea, we drove them over ridge after ridge and then held tight, and for many hours held a radius of over two miles against everything they could do to dislodge us, while the fleet smashed up their sea-shore forts and the brigades poured in behind us, hurrying up one after the other to support us and to reinforce our thinned ranks. It was during the afternoon that I got thinned out myself, by a lump of shrapnel and a bullet both in the same second, and they have successfully put me out of action for sometime.

Those magnificent fellows nameless heroes-carried me back for over a mile through an unceasing hell-fire and then quietly returned to the front, after depositing me at a depot. They were Victorians from the southern brigade men. One of them was knocked over while we were getting back. But he wouldn’t hear of giving up or being helped himself, but staggered to his feet again, and lifted me with the others and got me into safety. A shrapnel burst over head and knocked him senseless, for a minute. I thought he was a gorner at the time, and it was a marvellous escape. At the depot they had no stretchers left, and the wounded had to crawl and get as best they could to the shore, down a gully, with the Turks snipping us all the time from above. Thanks for their ridiculous shooting we were none of us hurt. Some very fine things were done that day by many fellows. …