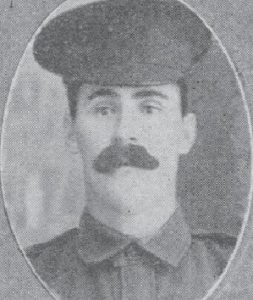 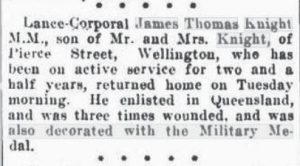 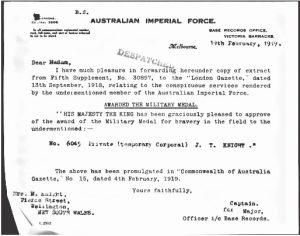 Source: Wellington Times, Thur 27 Feb 1919
Dear Sir,
No. 6045 Pte. James Thomas Knight, who enlisted at Clermont,
Queensland on the 14th January, 1916, and was reported to the
Patriotic Executive of this town as killed in France on the 7th June 1917, has written asking for assistance from the “Wheeler Reserve Fund.” Kindly inform me at your earliest conveniences if your records contain an entry reporting of the death of this man. He belonged to the 19th reinforcements, 15th Battalion, 4th Infantry Brigade.
Yours faithfully,
M. Nagle. 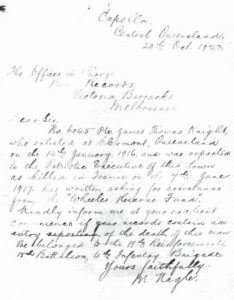 M. Nagle was informed by the
authorities that the soldier who had
been killed was the late James Taylor
Knight No. 159, who had enlisted
at Enoggera. It was regrettable
that confusion arose from both
men having the same surname and
initials.