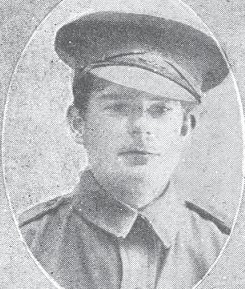 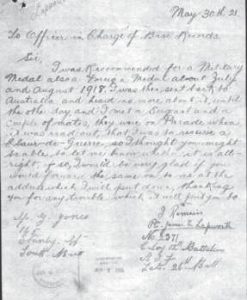 To Officer in Charge of Base Records.
May 30th, 21
Sir,
I was Recommended for a Military Medal also a Foreign Medal about July and August 1918. I was then sent back to Australia and heard no more about it until the other day, and I met a Sergeant and a couple of mates, they were on Parade when it was read out, that I was to receive a Croix-de-Guerre, so I thought you might be able to let me know whether it is all right, if so, I would be very glad if you would forward the same on to me at the address which I will put down. Thanking you for any trouble which it will put you to.
I remain
Pt. James E. Lapworth
No. 2371
C Coy 12th Battalion AIF
Late 26th Batt

It was discovered on page 14 of JE Lapworth’s NAA File that he had been recommended for the Medaille Militaire in June 1918. The recomendation did not eventuate.