Dr Steel was born in 1897 to parents Rosa Caroline Till and Walter Rust Steel in West Melbourne, Victoria. His father was secretary to the State Governor and was passionate about ensuring his children had a good education. Walter Steel completed his junior certificate at the same time as his son, Dr Henry Walter Steel, which was reported to be quite motivating for them both. Dr Steel and his sister Vera were also very
talented musicians and it was known that he had to choose between a career in medicine or a career in music as a violinist.

Dr Steel was an avid motorcycle and car hobbyist often tinkering, repairing and building cars in his spare time. He was even known for repairing cars of the medical staff at Rosemount and Greenslopes hospitals. When in Stanthorpe, it was well known that Dr Steel drove a Hupmobile around town, in an era where cars were not common. His other main hobby was tennis which he played until his 80s. During his time in Stanthorpe Dr Steel was also a member of the Stanthorpe Operatic Society and assisted with directing and producing theatre. 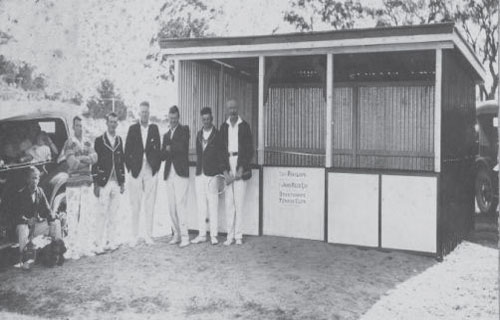 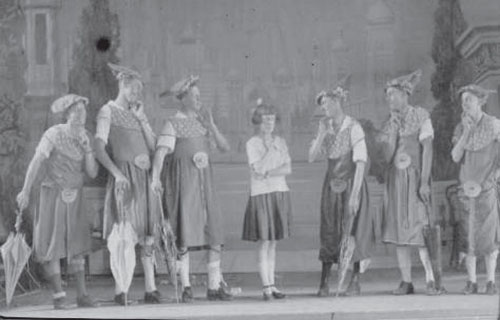 Dr Steele served as Captain of the AAMC Reserve in the First World War and was discharged in 1918. He was known as the ‘Diggers Doctor’ although he did receive some criticism for never having experienced being an actual ‘digger’ on the frontline. This notion was very quickly rebuffed by ex patients who were very appreciative of his work, understanding that he would have served given the chance. Dr Steel attempted to enlist during the Second World War, however his application was declined as the need for his medical skills were required on the home front.

Dr Steel, completed 6th class at Moreland State School Victoria in 1909. He received a scholarship to the University Practicing School in 1910 and was accepted for enrolment for Medicine at the University of Melbourne in 1914. He was 16 when he started university and finished his medical degree at the age of 20. However, he actually passed the medical exam in 1916 when he was only 19. According to family reports, Dr Steel sat the exam in 1916 for practice but was surprised that he actually passed. Apparently, the medical faculty promptly informed Dr Steel that he was too young to graduate and insisted he stay another year. Dr Steel sat the medical exam in 1917 and graduated.

Dr Steel applied for the position of superintendent of the Repatriation Sanatorium at Stanthorpe in January 1921 following 12 months work as a resident medical offier (RMO) at the McCleod Military Sanatorium and 4 months’ work in Stanthorpe as the OC. When Dr Steel arrived at the Sanatorium, the conditions were tough with patients residing in very basic accommodation. Early understandings of TB treatment meant that the Sanatorium was designed with open windows and verandas, all for the purpose of patients having access to fresh (cool) air as it was thought to be good for the lungs and therefore able to assist with TB recovery. If the weather was inclement however, they were allowed to lower the blinds. Under these conditions Dr Steel often recounted that it became quickly apparent which patients would survive and which wouldn’t.

During his time there it is reported that the conditions and infrastructure improved considerably. Prior to Dr Steel commencing at the sanatorium there was an estimated 70 – 80% death rate of patients, but he was able to turn this around very quickly to an estimated 60 – 70% survival rate. According to relatives, this was attributed to the meticulousness focus on cleanliness and hygiene and very high standard of patient care that Dr Steel instilled in the running of the Sanatorium. This is perhaps best observed in the following story from his grandson Ian.

“When he first started at the Sanatorium, he organised an inspection of military standard. He marched around the hospital with the matron and others and had all the nurses lined up inspecting every inch of the facility. During this inspection he opened a cabinet and saw a dirty dressing in there. Without comment he casually closed the cabinet and continued on with the inspection. After the inspection he gathered all the people in
leadership roles and said, ‘Right, I want every cupboard door removed and brought to the quadrangle to be burnt.’ That ensured there were no longer any places to hide mess. The only cabinets with doors left in the facility were the cabinets with medicine. He had the rest of the doors burnt. And that was his fist day.”

According to his grandchildren, Dr Steel earned the nickname of “Bill the Bastard.” This related to his tendency to polarize people with his military dedication to cleanliness and order. However, despite his reputation the appreciation of staff and patients was clear, this is particularly evident in the farewell celebrations when he left the Sanatorium. During his time at the Sanatorium, Dr Steel was also invited to a number of special events including a garden party at Government House. He was also fortunate to meet Bert Hinkler. Hinkler  made a point of visiting the soldiers at the sanatorium when he visited the township of Stanthorpe in1928. 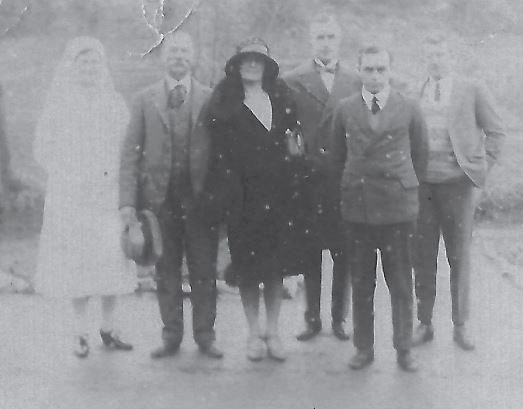 According to her Grandson Ian, it is likely that Dr Steel’s wife, Cossette, had minimal involvement in the Sanatorium. Dr Steel understood well the risks of working with the highly contagious disease of TB and was quite paranoid about the possibility of infecting his family. His fastidiousness around hygiene and prevention of infectious disease was also embedded in the “Steel family tradition” where he insisted to all his family and friends that kisses were only received or given on the forehead.

Cossette is remembered by family as a pint size formidable lady with a very kind heart. Cossette was the daughter of dairy farmers from Moe, Victoria. Cossette trained as a teacher and was considered to be an intellectual, an important factor in her relationship with Dr Steel. Dr Steel and Cossette had both attended Melbourne Grammar but were in different years. Although both shared the acclaim of finishing dux of their senior years they didn’t know each other well during their school years. It was not until after school that the two became reacquainted on a tram ride in Melbourne. According to family stories, Dr Steel remembered Cossette from school, and during that fist conversation he was impressed that they were “speaking the same language,” with Dr Steel finding an intellectual equal in Cossette. Cossette and Dr Steel were married in 1923 and had four children, Mary, James, William and John. Cossette passed away at the age of 67 in 1966. 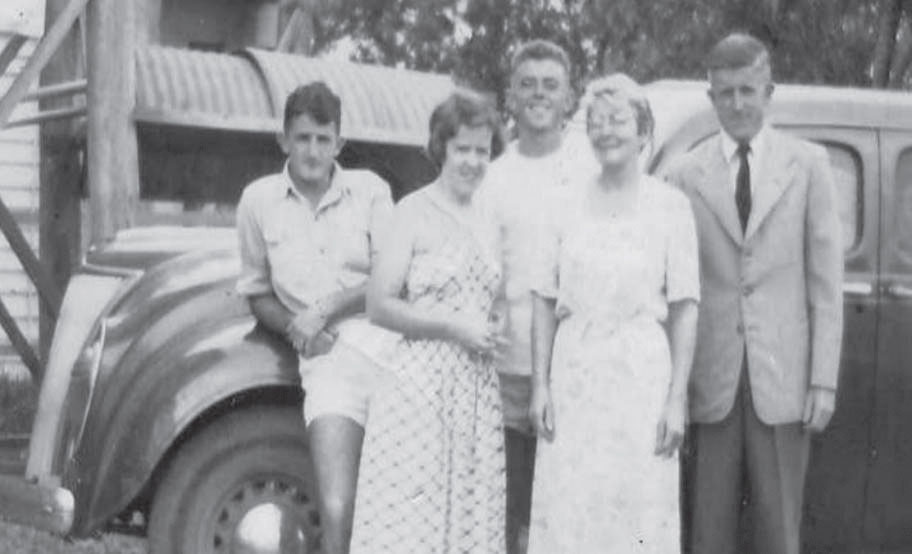 Dr Steel was formally offered the position as Medical Superintendent and chest specialist at Rosemount on April 26th, 1929. He remained in this position for 18 years. There were also a number of activities and visitors to Rosemount during Dr Steel’s time including, His Excellency the Governor Lieut General Sir John Goodwin, Prince Henry Duke of Gloucester, Pilot Miss Amy Johnson and the celebration of the Kings Silver Jubilee. Family also recall that during this time, with no easy access to telephones or pagers, it was not uncommon for staff to come into the bedroom and wake Dr Steel to call him for duty by pulling on his toes.

Dr Steel was appointed the fist medical superintendent of Greenslopes Hospital in 1947. During this time he was also the British Medical Association representative on the council of the Queensland Institute of Medical Research from 1947 until 1957.

Admiral Jonas Howard was one of the many important guests to visit Greenslopes during Dr Steel’s time at the hospital. Dr Steel retired on January 25th 1962, from Greenslopes Hospital at the age of 65. For his retirement he was presented with a large smokers stand and cigarette lighter by staff at Greenslopes.

Dr Steel was awarded an Order of the British Empire (OBE) on the 1st of January, 1963. Apparently he was at first reserved about the award, saying that it was not necessary as it was a part of his job. He was subsequently told that it would be an insult to the British Empire if he did not take it. A number of telegrams were sent to congratulate him including ones from the Returned Soldiers League, the Repatriation Office, and the then Prime Minister Robert Menzies. Dr Steel died on the 5th of October 1990, aged 93 years.