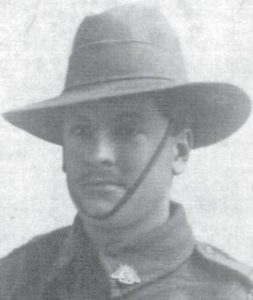 Capt. Sanderson   –   28/10/17
Dear Sir
You will probably remember our interview concerning my younger brother on Wednesday  afternoon last I came and asked if I could get him out of the line because he is under age. The death of another brother on the fifth of this month of whom I had just received the news of on the morning of the day I called on you, prompted me to do this, as he was also under age. I have obtained the copy of his certificate of birth which you told me I should have to get, before you could do any thing in the matter, and I am enclosing it in this letter. He is as I told you at the time, only fifteen years, and as you said enlisted under an assumed name, in fact we all did, there are four of us.

I sincerely hope you will be able to fetch him out of it not that he will like it I know only he is too young altogether and he has been in France about twelve months now. His name & regiment I give below.
L/Cpl William Herbert Holton
No 426
B Company
41st Battalion A.I.F.
HOLTON the name we all enlisted under is our fathers second christian name. I think this is all the information you wanted of me. I have written to him so he will know.
I remain, yours respectfully
Francis Holton
No 317 Private
11th Machine Gun Coy. A.I.F. 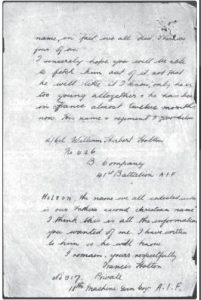