In 1925 three Anzac Cottages were built in Stanthorpe. Technically these three cottages are TB Cottages, that is, housing for sufferers of tuberculosis. The returning nurses, soldiers, sailors, airmen and other personnel of the war, suffered not only from the obvious, and not so obvious damage of battle, but the diseases of the places in which they served. Administratively however, all cottages were referred to as “Anzac Cottages.” In Queensland a total of seventyseven Anzac Cottages were constructed from 1917 to the mid 1920’s.

The idea for the building of Anzac cottages began early in World War 1, when it was realised that some returning incapacitated service personnel, and in some cases widows, needed to be provided with housing. Citizens around the State started setting up local committees and patriotic funds, to account for the many kinds of issues to be dealt with as a result of the war. By 1917 the Golden Casket (still in existence today) was specifically established, by the Government, to raise money for the building of Anzac Cottages and other repatriation matters, such as, soldier settlements, widows, orphans, hospitals. The money raised (over four million pounds) was administered by the Queensland War Council. When this Council was disbanded in the 1920’s the administration of the Cottages was transferred to the Public Trustee. Many years later defence housing became a federal responsibility.

At first, the houses were constructed by volunteer groups, and all to the same design. This was organised by the setting up of a local committee and applying to the Queensland War Council for approval and money to purchase the materials to construct the house.

From 1917, through to the mid 1920’s, there are numerous newspaper reports on the progress of various local committees and their activities. This involved many tradesmen giving up their weekends to do this work voluntarily. Inevitably the wives of these volunteers also offered their services by setting up auxiliaries to provide morning and afternoon teas and lunches for the volunteer workers. When the houses were completed there was usually a ceremonial opening by the Governor, and, or the local Member of Parliament and other dignitaries, and keys handed to the new occupants of the house. In the case of the Stanthorpe cottages, it seems most likely that private contractors performed the building work. They were also amongst the last of the Anzac Cottages constructed.

The selection process, for an Anzac cottage involved assessment and recommendations by Dr W. H Steel, the Queensland T. B. Association, and the War Council. Dr Steel’s recommendation is said to have carried the greatest weight. Selection criteria included whether the soldier was homeless, married, health status, and personal circumstances.

Also of interest is the case of John Wallace Garrick. He was a World War 2 veteran, unlike others with World War 1 service, although all suffered from TB. John Garrick occupied McGregor Terrace from 1948 until 1962. By the 1960’s the World War 1 generation, occupying the Anzac Cottages, had either died, or moved into other accommodation arrangements, in their old age, and so the State Government found that it had seventy-seven vacant cottages. As a result the Government decided to sell the cottages. All three of the Stanthorpe Anzac Cottages were sold by the mid 1960’s.

In a sense the story of the Anzac Cottages ends there, however the houses continue to exist as small memorials to the generosity of people, who saw a need to look after others returning from a war that damaged and destroyed so many lives. 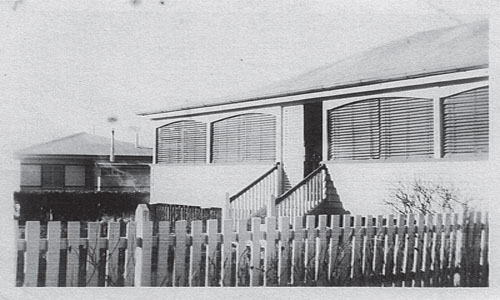