‘The girl with the flags’

Ethel Campbell, was born in Scotland, but moved to South Africa with her family during the war years. She was engaged to be married, but the cruel and callous nature of war dictated otherwise, and her fiance was killed during the First World War. Wanting to do her bit for the war effort, Ethel devoted herself to looking out for the soldiers who disembarked in the port of Durban.

An expert signaler, Campbell would greet the Australian troop ships, using her flags to signal: “Welcome, brave Australians. Come along to the Y.M.C.A. Hut, near the Town Hall.” The YMCA Hut, also known as the “Soldiers’ Rest”, was a place where for a minimal cost, soldiers could get a great feed, bath, entertainment and just relax. After weeks at sea, this was a very welcome stop for the troops. Her father, Dr Samuel Campbell, was a citizen of high standard in Durban, and he would often invite Australian soldiers to visit their home for a meal and some entertainment.

At the end of the war, when the ships were transporting Australian soldiers back from the front, Ethel would often provide essential services for the ships unable to dock in the port of Durban. Provisions of fresh fruit, vegetables, cake, eggs, toiletries, newspapers, books and all manner of items to make the journey home more bearable were sent out in small boats and hoisted aboard.

When it was time for the ships to leave, Campbell would once again be on the wharf to signal: “Good-bye, Australians. Good luck. Come back soon.”

Ethel, who carried out her signaling in all weathers, fair and foul, also became known as “The Angel with the flags”. Held in the highest esteem, and as a sign of deep appreciation, the soldiers often passed the hat around in order to purchase a gift for Ethel. One of the most memorable items they presented to her, was a writing table of Australian maple which had been especially commissioned for her. In 1919 she received an MBE for her services to the war effort.

In 1923, The Returned Soldier’s League (R.S.S.I.L.A.) invited the Campbell family to Australia. Their tour started in Western Australia, working its way to  Queensland. While in the Stanthorpe district, Ethel visited the soldiers at the Kyoomba Sanatorium as well as those at the Soldier Settlement at Amiens. Many of these men would have had contact with “the girl with the flags”.

Following is a poem written by Ethel, which was published in a Durban newspaper, after some Durban elitist made a disparaging remark about some Australian soldiers who were seen drinking beer.

We stand on the shore of Durban,
And watch the transports go
To England from Australia
Hurrying to and fro,
Bearing the men of a nation
Who are heroes to the core
To stand in fact by the Motherland
And they’re sending thousands more!

We’ve watched the ships returning,
With the cripple and the maim,
With limbs that trail and falter
Their’s an immortal name.
The deathless name of “Anzac”
That thrills from pole to pole,
The remnants of the heroes
On the long and glorious roll.

And now in their tens of hundreds
Come the men to fill their ranks,
And what can we do to show them
Our, love, our pride, our thanks,
We can’t do much (I own it)
But give them a passing cheer
While the real elite, beat a shocked retreat
Why, they saw one drinking beer.

O God! Could we show these misers
The path that the “Anzacs” went!
Could they talk with a sneer of Australians
When one or two get drunk!
I’d rather a drunk Australian
That a wealthy Durban funk!

He’s a better man than you are,
You dear teetotal saint!
You do not drink – you will not fight!
What a wonderful restraint!
We stand on the shore of Durban,
For we’re not all made like you,
And the glorious name of “Anzac”
Thrills us through and through!

But all we can do is to cheer them,
And throw them a trifle from shore,
We’re not millionaires (like some are)
Or perhaps we would try to do more.
They’re coming in tens of thousands,
And here’s to their honour to-day,
Here’s to the sister dominion
Who is showing us the way? 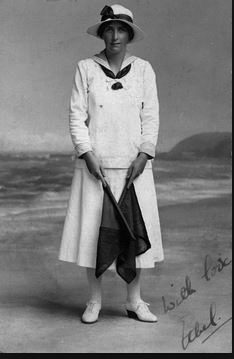