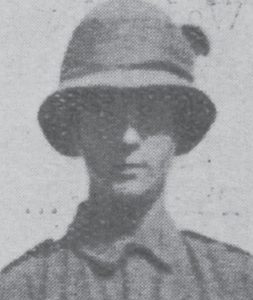 Robert COLVIN, MC
Lieutenant Robert Colvin M.C., was the first Queenslander to be awarded the Military Cross. In June of 1916, he received a gun shot wound where the bullet passed through the left knee joint. Returned to unit.

Whilst Robert Colvin was overseas he had contact with Mrs Annie Wheeler at her London address and via mail. The following information has been sourced from the correspondence files of Mrs Wheeler which are held at the John Oxley Library, Brisbane.

Lieutenant Colvin was under the medical care of Dr Henry W Steel while at Kyoomba. Dr Steel states in his report dated 19/2/1925:

This man has been a cot case since admission and for the past 2 months has been retrogressing …. Suitable case transfer to “Ardoyne”.

The announcement of the death of Lieutenant Roy Colvin, M.C., of Rockhampton, which occurred at the Corinda Military Hospital, Brisbane, on March 9, was received with deep regret by his many friends here (writes our Rockhampton correspondent). Lieutenant Colvin was born at Duaringa 31 years ago. When the war broke out he was among the first to enlist from Rockhampton with the Australian Imperial Forces. He left Australia with the 9th Battalion and took part in the memorable landing at Gallipoli. On its evacuation he proceeded to France. He received his commission for bravery in keeping the line of communication at Pozieres. For his distinguished services he was mentioned in despatches five times, and received the Military Cross. Lieutenant Colvin was the first Queenslander to receive this military decoration. The after effects of the war proved too much for him, and he had to enter the Westwood Sanatorium, where he was for a considerable time. He afterwards went to the Repatriation Sanatorium at Stanthorpe, and only a fortnight ago entered the Military Hospital at Corinda. He is survived by his widow, who was formerly Miss Brackstone, and his little daughter (aged 12 months).