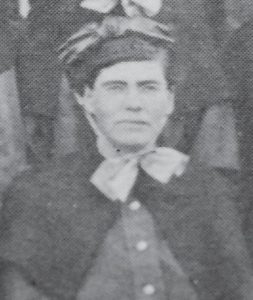 LANGFORD, Rose Jane
Rose Langford completed her General Nurse training at the Ipswich General Hospital in Queensland. Prior to her enlistment she worked in Queensland as Matron of the Mount Morgan Hospital. She also nursed at Mount Perry and Mackay Hospitals and was Head Sisterat the Bundaberg Hospital.

While she was at Mt Morgan Hospital questions were raised by the then secretary of the Australian Trained Nurses Association (ATNA) about her eligibility to hold such a position. After review and the completion of a further exam, Rose Langford continued her nursing career.

Rose enlisted as a Staff Nurse on the 11th November 1914 and embarked on HMAT A55 “Kyarra” which was one of the first ships to leave Australia and head to the war zone. When she arrived in Cairo she was posted to the Australian General Hospital which had been set up at the Heliopolis Palace Hotel. Rose served in Egypt and on the Flanders Fields in France . She was subsequently promoted to Sister on 1st August 1915.

Mentioned in Despatches of Brigadier General F.H. G.Cunliffe CMG, 16 March 1916 for her devotion to duty. Located in London Gazette 21 June 1916.

After the First World War ended, Rose worked at the Kangaroo Point Military Hospital before being appointed as Matron to the Kyoomba Sanatorium in 1918.

“... Two new wards have recently been added, so that there will be accommodation for 18 more
patients. There are 31 now. New kitchens also are in course of erection, and a fine big
mess-room. “Then,” said Matron Langford, “the old men’s room will be ours. At present we dine
in the little sitting-room.”
Source: National Leader, Fri 30 Aug, 1918