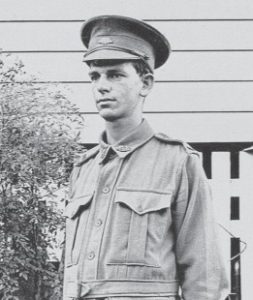 Samuel Wesley LEE
19th September 1894 to 1st September 1982 Samuel Wesley Lee, or Wesley as he was always known, was born at home in Mount Morgan on 19th September 1894. In later years this gave him the privilege to be able to say he had lived under five Monarchs beginning with Queen Victoria. Wesley was the first of three children born to Samuel and Ellen Lee. His early childhood was spent in Mt Morgan until 1908 when, at age 13 and as the Dux of Central Queensland, he went to board at the Brisbane Boys’ Grammar School. He passed his Junior exams in June 1910 in English, Latin, Arithmetic, Algebra and Geometry. After leaving school Wesley decided that he, too, would like to be a printer as was his father Samuel and his grandfather Robert. In later years Wesley’s son David also took up the printing trade and so continued that tradition for another generation.

Wesley’s apprenticeship began on 1st May 1912. Wages were to be 7/6 (75 cents) per week to begin with through to 30/- ($3.00) per week at the end of five years working 48 hours per week. Holidays and lost time were to be deducted from those wages, and overtime would be paid at one and a quarter times the ordinary rate. The indenture for Wesley included such promises from him, “as keeping the secrets of the firm; taverns, inns and ale houses he shall not haunt; at cards, dice, tables, or any other unlawful games he shall not play; matrimony he shall not contract; and Crocker and Inglis (his employers) shall and will teach and instruct the said Apprentice in the art and mystery of Letterpress Printing”. War intervened so Wesley’s apprenticeship was reduced to four years and four months.

During his time at the Grammar School Wesley met a young lad named Ern Smith who later became a Canon in the Anglican Church. In 1916 they joined the Forces together, travelled to England on the Argyllshire and remained the best of friends for the rest of their lives. Wesley served his country as part of the 9th Field Auxiliary Brigade. Travel arrangements to the war zone in those days were certainly not 5 star as, after returning home, Wesley refused ever again to eat rabbit as he often recalled that was the staple diet on board ship and it was not uncommon to meet up with a rabbit’s eye in the stew/soup. As for so many young men the war had a lasting impression on Wesley and he rarely spoke of his experiences, but one story he told was that it was so cold in Europe he and Ern spent many nights sleeping with the pigs just to keep warm. During his time of service in France Wesley became quite ill but the medical orderly assured him he was OK and told him to get back to work. The next day he was confined to bed only to wake up in the morning in the basement. Why? Those who were not expected to see the night out were moved presumably to be made ready for burial. Wesley was later hospitalised with pleurisy in Denmark Hill, London from May to August 1917. He returned to Australia on the hospital ship TSS Demosthenes arriving back in September 1917 and was discharged as medically unfit on 13th March 1918.

The sanatorium at Kyoomba, to the east of Stanthorpe, was to care for people with chest complaints (including those with TB from which Wesley also suffered) as there was a strong belief that the crisp, clean air of Stanthorpe was a remedy for those conditions. This was to be Wesley’s home for the next six months. He arrived on a bleak, cold, wet day in late November 1917 and found it so intolerable he eventually discharged himself. Wesley wrote of being “a very sick, and very lonely young man in a strange town” and was forever grateful for the kindness and friendships made with people of the local Methodist Church especially the Will Bonners from “Milford” at Liston over the border from Stanthorpe.

Wesley’s health improved and by the end of 1918 he moved to Inverell to begin his own printing business. During his time in Inverell he met and fell in love with a beautiful young lady, Gertrude Pitkin. Still suffering ill health he returned once again to his parents at Wellington Point at the end of 1919. On doctor’s advice, in 1920, he joined many inexperienced settlers who arrived in the Stanthorpe district. Wesley purchased an orchard at The Summit. The family travelled by train to Stanthorpe to see him and were captivated by the area. Before long the house at Wellington Point was sold and a new one built in College Road, Stanthorpe. In 1921 Samuel also built Caxton Buildings, a block of four shops in Maryland Street. And so the printing, stationery and bookshop known as Samuel Lee & Co commenced trading and continued for some 50 years. Wesley and Gertie Pitkin were married in the Inverell Methodist Church on 4th June 1924 after a four year engagement. In March 1926 they were blessed when their daughter Dorothy was born. Life on an orchard was not easy so much so that, by 1927 Wesley took a job as Manager of The Summit Fruitgrowers Co-operative. It was during that time he was instrumental in having telephones connected to homes in The Summit area.

In late 1927 when Brian was just 10 days old his Mother died as the result of childbirth. Wesley and Gertie had only three and a half years of marriage. Now he had lost the love of his life and his two children, Dorothy and Brian, were without their Mother. Wesley continued to live and work at The Summit while his two children lived in town with Grandma Lee. By 1929 Wesley had left the orchard, moved to Stanthorpe to live and joined his father so as to take up his printing trade again. This was of great assistance to his father who was not well at the time.

Phyllis Naylor had worked in the retail section of Samuel Lee & Co for a few years. In 1933, Wesley and Phyllis were married at 7.00 p.m. on 27th January 1933. There was one thing Wesley disliked and that was camping. Perhaps this aversion to camping was due to his war-time experience, but it was to Undercliff Falls, just over the NSW border, that they drove to camp for their long week-end honeymoon. Soon after their wedding the old school dormitory opposite his widowed Mother’s home in College Road became available for rent complete with its flat galvanised iron bathroom floor, cement bath tub and one cold water tap which provided water to a basin resting on a bench. After living there for 13 years it became available to buy. Wesley and Phyllis purchased the building and moved it on to an eight acre block of land much closer to town. Their new address became 45 Bridge Street where they lived happily for many years. They were blessed with five children – Ruth, Joan, David, Peter and Marion.

After a long and truly eventful life, one filled with love and care for those around him, a life of honesty and integrity in business, of service to others and a life devoted to his Lord and Master, Wesley died peacefully at home on 1st September 1982 just a few days short of his 88th birthday.