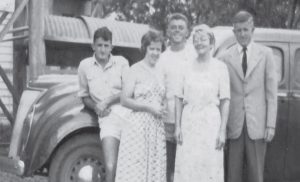 Cossette was the daughter of dairy farmers from Moey, Victoria. After attending school at Melbourne Grammar, she trained as a teacher. As it turned out she and Walter Henry STEEL both attended the same school but were in different years. It was on a tram ride in Melbourne where she and Dr Steel became reacquainted. Even though Dr Steel left Melbourne and took up the position of Medical Superintendent at the Kyoomba Sanatorium in 1920, they continued their courtship. In 1923 Dr Steel took leave and returned to Victoria where the couple were married.

During her time at the sanatorum it is believed she had minial involvement with the patients and staff as Dr Stell understood well the risks of working with the highly contagious disease, tuberculosis. Cossette and Walter had four children, Mary, James, William and John.

During their time at Kyoomba the Steel’s were invited to a number of high profile functions. One of the functions was a Garden Party held at Government House with Their excellencies The Governor General & Lady Stonehaven on Friday 6th November 1925.

The family moved from Stanthorpe to Brisbane and after he retired, Cossette and Walter moved to the Gold Coast. Cossette died on the 26 August 1966 and was cremated at Mt Thompson crematirium in Brisbane.